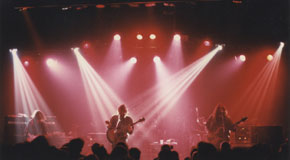 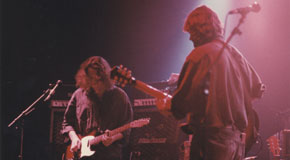 Another visit to 1996 brings us the 9th volume of Porch Songs….and another amazing performance in the process.

Widespread Panic made Colorado their second home a long time ago.  They’ve probably played every town and venue in the state…..from the true hole in the walls to the likes of Red Rocks and Denver’s Pepsi Center.  No matter the season of the year or how remote the venue, the boys always came ready to play.  On a Monday night in June of 1996, Grand Junction was the place….and a seamless performance was in the making.

Pretty much Old School defined, this show is all about the connective tissue between the tunes and the magic of improvisation.  Some of the segues turn on a dime while some evolve from nowhere.  Right out of the gate we get a taste of what’s in store with the Glory Fishwater opener…..the jam out of Glory charges into Fishwater and it’s game on.  With a smooth rhythmic buildup from L.a. into Weight of the World, the band is locked in and scorching the set.  From the start of The Last Straw, the band skillfully takes us on a non-stop ride….with Dirty Business effortlessly sandwiched into Stop Go and then closing the set with Pigeons right on into Bowlegged Woman.

The second set was no different in how it set up and played out.  Opening with Tall Boy, the segue afterward finds JoJo playing out a backwards Hatfield intro before the rest of the band joins him for the real deal.  From there, Radio Child and Pilgrims bring us to a turn on a dime beginning to Blight and then a rager through and through with B of D, Airplane and then a crazy Pusherman jam into the Drums.  Of course, Pusherman came back around before Conrad closed this set.  The Postcard encore said it all…”I don’t ever want to leave!”….and they didn’t as they stuck around for a great rendition of Stag-O-Lee.

This show just brings it all together….musicianship, intent, patience and that unending love between the stage and those lucky enough to have found themselves in Grand Junction on that Monday night…..and once again, the boys proved a point… don’t miss a Colorado show…no matter what day of the week it might be!!!