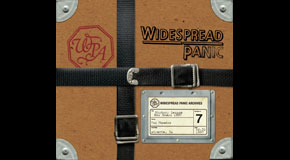 History Lesson New Year’s 1997, Widespread Panic’s first set of the New Years performance presents a ‘history lesson’ on the band’s formation, sequentially introducing each band member with a song that uniquely represented the time frame at which he joined the band.

John Bell begins with solo arrangements of “Coconut” and “Let’s Get The Show On The Road” just as he did in bars and parties around Athens in the early 1980’s.  Mike Houser joins Bell with “Wish You Were Here,” (a song that at the time, the band hadn’t played in over 1,200 shows) thus, beginning their long time collaboration.  Schools’ then joins the band and adds the bass line to “Stop Go”, and by the time Nance steps into drums Widespread Panic is ‘officially’ a band (1986) but not yet complete. Domingo Ortiz adds his percussive influences to “Ophelia,” (which the band hadn’t performed in almost 1,000 shows) and finally, Hermann works his way into the set and the band on keyboards with “Junior,” to complete the lineup that took the band all the way to 2002.  Recorded by Danny Friedman in a multi-track format on December 31, 1997 at the Fox Theatre in Atlanta, GA and then mixed and mastered by Drew Vandenberg in 2011 at Chase Park Transduction studios in Athens, GA.