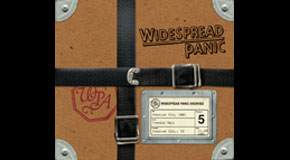 With the official Widespread Panic Archives release of Johnson City 2001 that night’s performance continues to take us everywhere….with old tunes, new tunes, borrowed tunes, blue tunes…and even a “Happy Birthday” for Todd.  Straight from the “L.a.” opener, this show just wasn’t in a hurry. And to quickly prove it, “Ain’t No Use,” “Impossible,” and “Worry” all realized their opportunity to stretch the body and mind before the band gave everyone a chance to catch their breath with a rare rendition of the previously unreleased “New Blue.”  After instantly finding the 2nd set groove with “Weak Brain”, the relatively new “Old Neighborhood” and the always-welcome “Trouble” continued to exhibit the night’s patience.  From that point, this show just didn’t stop or disappoint….with creatively inspired renditions of “Love Tractor,” “Pigeons” and “Airplane,” and even an all-out bass-driven “Astronomy Domine” jam out of the drums.  Mikey put his idyllic touch on the evening with “The Waker” before the band finished up the second set with “She Caught the Katy,” a tune normally reserved for sound checks.  The first of the night’s two encores was certainly fit for a Tuesday with “Gimme” before they finally sent everyone off into that cold Tennessee night with nothing but a “Chunk of Coal” and, of course, a smile on everybody’s face.